The mobile application industry continues to grow at an astonishing pace. Research shows that revenue from mobile applications is expected to exceed $188 billion by the end of 2020–and companies of all sizes are competing for a piece of the pie. As a result, the race to develop successful mobile applications has led many businesses to focus on building experienced in-house development teams.

Companies interested in developing mobile applications must invest in JavaScript development. That’s because some of today’s most popular mobile and web applications were built using a JavaScript framework.

However, the type of skills needed for native application development on both mobile operating systems can be hard to secure for a reasonable price. That’s why many companies have turned to JavaScript development services for help.

If you’re interested in hiring a developer for your projects click here to find the Top 5 Sites To Hire Javascript Developers/Freelancers. These sites all use vetted developers to make sure that you don’t have to go check whether they are good quality hirees or not. Given that they have been screened through several interviews and tasks, you can be sure that they can hit the ground running on your required Javascript apps immediately.

These outside firms have years of experience using JavaScript to develop the sort of successful native applications that customers crave. Companies of all sizes outsource JavaScript development to bring products to market quicker and rapidly scale their business without sacrificing long-term flexibility.

Read on to learn how companies like Netflix, Facebook, and Uber used JavaScript to develop many of the world’s most beloved applications.

Netflix rapidly transformed itself from a movie rental business into one of the largest media companies in the world.

The company was originally founded as a local DVD subscription service in 1997. Today, Netflix has over 148 million subscribers across the globe and is the most popular video streaming service in the world.

In addition, the firm has also ventured into media production. Netflix has made several hundred original movies and television shows over the past five years. Series like House of Cards and Stranger Things have provided the company with much-needed credibility as a content creator.

So, when it came time for the company to redesign its online streaming platform in 2014, the development team turned to Node.js. By this time, the JavaScript library had already developed a reputation as a simple framework with wide applicability.

Previously, the company used Java for the server side and JavaScript for the front-end. The back-end was handled by a single large application running Groovy scripts. This forced developers to become fluent in two different programming languages. Node.js eliminated this problem so top JavaScript development companies in the Theymakedesign blog know and handle this very well.

By using the same JavaScript framework on the front-end and back-end, developers reduced their workload and increased the quality of the final web application. By utilizing separate APIs written in Node.js, Netflix was able to reduce its total development time and improve their application’s speed.

The company also saw an improved user experience as a result of faster loading times and intuitive movie previews. This is because Node.js uses an event loop and an asynchronous and non-blocking I/O to handle tens of thousands of request per second with ease. This reduced latency dramatically, a problem which had been throttling Netflix’s services prior to the switchover.

Candy Crush Saga is one of the most successful video games of all time. The free-to-play matching puzzle game was initially released as a Facebook web application in 2012 before being reworked for Windows, Android, and iOS.

Candy Crush was one of the first popular freemium games. This means that the game is free to play, although in-game purchases can help users progress faster or purchase add-ons. This model allowed the company behind Candy Crush, King Digital Entertainment, to earn more than $4 million per day in 2018.

King Digital Entertainment developed Candy Crush Saga with the JavaScript programming language. The flexible nature of this framework enabled developers to create a mobile application that looked and felt like the Facebook web application.

In addition, Candy Crush made use of Facebook’s React Native Javascript framework to link the mobile game with Facebook’s web application. This allowed users to invite friends to the game and compare their scores against their social network. This feature helped make the game so popular and kept users engaged past their initial download.

Facebook continues to be one of the most important corporate supporters of the JavaScript development library. The popular JavaScript framework React Native was developed and released by Facebook in 2015–and has undergone tremendous growth in the time since.

However, because the code is generalized for multiple operating systems, the user interface and experience design often looks unnatural on each device.

Mark Zuckerberg famously said in 2012 that “The biggest mistake we made as a company was betting too much on HTML as opposed to native.”

Facebook created React Native to overcome user design challenge. While it was initially designed for iOS development, it is now used for both Android and Windows 10 projects as well.

The mobile ride-sharing company Uber has grown in leaps and bounds since it was founded in 2009. While the company initially launched with limited transportation services in San Francisco proper only, its services are now available in 173 countries across the globe.

The application works by pairing customers with Uber drivers, who use their personal cars to ferry users to their destination. Customers can hail a car with a single press of a button on their smartphone.

When it came time for the company to release a new version of their mobile application and to improve their matching system, they turned to Node.js for the following reasons:

The newly-released mobile application offered a variety of improvements over the previous iteration. For one, the matching system’s results were improved significantly.

In addition, Uber is now able to process over 2 million remote procedure calls per second. JavaScript worked wonders for Uber’s revolutionary ride-sharing service and continues to help other companies innovate.

LinkedIn is by far the most popular professional social media and networking website in the world. With more than 600 million members located throughout the world, the platform helps white-collar workers develop a professional network and search for career opportunities.

When the company sought to release an improved mobile application in 2012, they turned to JavaScript for both the front-end and back-end. By using a combination of HTML and native JavaScript code, LinkedIn’s development team was able to create a well-crafted application with a stunning user interface.

Node.js increased performance and memory usage in comparison to Ruby on the Rails. In fact, the application ran 20 times faster in some cases. Even more surprising, overall mobile usage increased by 23% once the new app was released.

The development team also benefited from the switch to JavaScript. Front-end and back-end development could now be performed by a single group. This saved the company money, improved consistency, and enabled the company to cut the number of servers from 30 to 3.

Over the last decade, JavaScript has become, by far, the most popular language for mobile application development. This happened because of early adoption by tech giants like Facebook and Netflix and by the JavaScript development outsourcing firms who help these businesses scale their development capabilities. 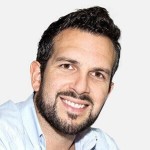