What Next For Augmented Reality? How Far Can We Go with Augmented Reality? The demand for better, faster and more powerful technology mounts year by year, day by day. And now, the real and digital worlds are merging into one. Today we’re answering the extraordinary question; how far can we go with augmented reality?

Are you a fiend for facts?

Are you constantly curious?

The distinction between AR, augmented reality and VR- virtual reality, has never been more important.

As AR developers stress, their tech doesn’t involve closing yourself off from the outside world for a solo experience. Instead, it creates a ‘mixed reality’ blend of the real world with digital images, holograms, and projections designed to improve your life.

Currently, there are four main types of AR: marker-based, markerless, projection-based, and superimposition-based – there are various nuances between them, but they all aim for similar user experience.

You’re probably most familiar with AR through your smartphone, and games like “Pokémon Go!”. The tech on mobile devices enables you to do much more than just catch a Pikachu, though, with QR codes also using it, and devices like the Apple Watch and AirPods are soon to be AR-enabled. But smart glasses are usually the go-to gadget whenever we’re imagining a fully-AR world. Projects like Google Glass have struggled to truly catch on, and today’s AR headsets tend to look a lot like VR models… transparent lenses yes, but also bulky and impractical.

But, that’s all going to change between now and 2030 – when designers believe we’ll move from products like the Microsoft HoloLens to prototypes as subtle as sunglasses, and eventually even contact lens devices.

Combine these lenses with tiny earpieces (even tinier than AirPods), and the user can almost forget they’re even wearing them. Going one step even further, the ultimate aim is that all of these things are controlled by our thoughts alone.

There are obvious benefits to gaming, some of which we’ve already seen – with the likes of “Pokémon Go!” earning praise for encouraging gamers to get off the couch. Traditional ‘open world’ games are usually graded for the size and scope of the world they create for their characters to exist in. But, with AR, the ‘maps’ are real-life towns, cities, countries or even continents. There are still some concerns (including increased risk of physical injury, and whether or not AR games are a disruption for anyone not playing them), but augmented reality is increasingly billed as the future of gaming.

AR is about more than just entertaining the individual, though, with many real-world applications. At the 2020 Tokyo Olympics, officials are hoping to make every sign in Tokyo translatable to visitors through AR phones and devices.

A city-wide task, it’d represent massive strides from previous language translation apps, but could also pave the way for even more impressive tech where AR users see real-time translated subtitles (or hear real-time translated dialogue) when talking to someone who speaks a different language.

Elsewhere, AR aims for the betterment of humanity, in the fields of science and medicine. It could revolutionize healthcare, vastly improving the training available to doctors by enabling them to make diagnoses or learn to carry out procedures on a digital model.

Even during surgery, an AR interface could soon provide surgeons with potentially life-saving information. AR could also sub in for face-to-face consultations with doctors, allowing patients to be examined without leaving their homes, and reducing wait times for appointments. Engineers and architects also have reason to be excited.

Complex structures like engines and motors could soon be tested in an AR landscape first before expensive prototypes are built. Likewise, architect blueprints look soon to be outdated and replaced by enormous, true-to-life digital models which clients can ‘walk’ through – to see exactly what the building will look like before a single brick is laid. Various militaries already use AR tech, as in the US Army’s Synthetic Training Environment (or STE) program, which in-part prepares soldiers for war. But we could soon see AR on the battlefield itself, similarly to how it’s already used by some military pilots.

The idea is to equip armies with digitally enhanced heads-up displays, to provide them with as much data as possible. AR could soon be indispensable in teaching, too.

Augmented reality as an educational tool

Augmented reality as an educational tool would mean fully-immersive lessons and, theoretically, increased student engagement. Imagine a history class where kids can ‘walk’ the streets of Ancient Rome, then Victorian London, then feudal Japan; Geography lessons when instead of textbooks on the Himalayas,  you’re transported to the mountains themselves; English lessons where you watch Shakespeare’s plays as though sat in an Elizabethan audience; or a science class which gives you the chance to ‘stand’ on the moon and look back at Earth.

Even field trips could be enhanced with AR museum exhibits bringing the dinosaurs ‘back to life’. On a smaller scale, AR apps for everyday problems are showing up more and more. Builders, electricians, and plumbers could soon transport themselves into your homes (hopefully with your permission) to identify a problem and calculate a quote – with no call-out charge. Interior designers could, similar to architects, build a digital version of your living room for you to walk around before you commission them to do the work.

Fitness apps can show you performance stats at the top left of your vision, without you needing to check your phone or watch. And running, walking or even driving routes could be laid out as if in front of you so that all you need to do is follow them. Naturally, all of this potential does breed various concerns – not least the emergence of ‘AR addiction’.

Because, with everything available at literally the blink of an eye, would we ever be able to take the headsets off or take the contact lenses out?

A collision between the real world and the digital world seems inevitable, regardless. And for better or worse, the environments around us could one day become one enormous screen loaded with endless information. And that’s how far we can go with augmented reality. 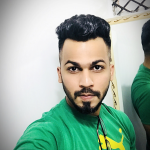