Great leaders are the ones who empower and inspire action. Today, we are living in the age of social media, our attention spans have been shrinking and we are texting more and talking less. Regardless of all these changes, the power of words remains the same and great speeches are the most enduring legacy of many leaders. Winston Churchill was a Nobel prize recipient, but his three memorable speeches: “I have nothing to offer, but blood, toil, tears and sweat“; “We shall fight on the beaches“ and “This was their finest hour“, remain his most iconic legacy in our collective memory. Martin Luther King’s “I have a dream“ speech, has been described as one of the greatest speeches ever because it resonated throughout the world and helped change the course of history. American presidents spend months preparing their inaugural address, the most famous being Kennedy’s: “Ask not what your country can do for you, ask what you can do for your country“. These are only some of the example of famous speeches that stirred the consciences. Regardless of whether one decides to write a speech on her own, or use custom writing service such as writemypaper123, and get some writing help, writing and delivering a great speech remains one of the most important tools of an excellent leader.

Importance of a Great Speech

King George VI was desperate to overcome his stutter, not only because the Nazis did not take him seriously because of his speech defect, but largely because it prevented him from establishing a connection with his nation during tumultuous times of the Second World War. Research has shown that one of the most important qualities of a leader is clarity of communication and speech is the best way to communicate a great idea. People in the audience want to feel a connection. A leader can have a good solution to a common problem, but it is to no avail if she can not convince the followers to support her cause. Another research conducted by Sunnie Giles has “clearly communicates expectations“ among the most important leadership competencies.

Music moves us by activating the areas of our brain responsible for emotions and speech does the same because language and music involve the same areas of the brain. That is why great orators pay close attention to the tempo, melody, and rhythm of their speech. This graph shows how Martin Luther King changed his voice during his famous speech in an attempt to find tempo, rhythm, and melody which would appeal best to his audience’s emotions. Something written on a paper can never have such a great emotional impact as what is spoken directly to our face.

One of the main motivations of every speaker is to change away audience thinks or feels about something. That what is written on a piece of paper can also drive change and influence people. After all, that is what propaganda posters were used for, but it is the most effective when spoken. This is why many leaders not only hire content writing services, but also a public speaking coach. People can strongly feel about something, but they are usually reluctant to take action until they are given an example to follow. It takes a great orator to inspire and encourage them.

It sounds almost like a cliche, but people like to establish a connection with someone and feel important. This is why a leader needs to be empathetic and build credibility because people can relate only to this type of persons. Someone who is a leader can be capable of finding great solutions to complex problems, but it will not be enough to gain people’s trust if they do not feel involved. It’s through their speech that great leaders are able to win over the audience.

A lot of people feel more comfortable writing than speaking and they tend to be more radical and less flexible when they write than when they speak. There is a good reason for this. In a debate, they can be challenged, but when they write it’s like a monologue. However, giving a speech also allows a leader to challenge people in the audience, change their hearts and minds and do it more convincingly. Someone who steps up and gives a speech is immediately identified as a person who is not afraid to take a risk and who has leadership abilities. These persons are far more credible than those who prefer to hide in the shadows.

Great leaders do not aim just to sell their idea and convince others that they should follow them. No, what they want is to awaken desire in the audience to follow their path. A truly great and inspirational speech convinces people that they should leave their comfort zone and do the right thing. It empowers them. These speeches are described as life-changing by those who were fortunate to listen to them. Michelle Obama is known as someone who can capture a crowd, but her “Empowering women“ video goes a long way in inspiring the audience and making them want to turn their lives around. Not because they are being sweet-talked into doing that, but because this speech taps into their inner power and inspires them.

How to Write and Deliver a Great Speech

It is a custom writing company capable of writing an excellent text for a speech. Their experienced experts know exactly how to appeal to the audience’s feelings by having a good hook and keeping it engaging and conversational. People often make a mistake thinking that writing a speech is akin to writing a paper. But that is not the case. While a great paper usually relies on the so-called highbrow words because it is supposed to sound academic, that is the speech killer-great speeches have to be conversational instead of boring. This is why it is important to hire people who know all these tricks and tips to write a memorable speech.

Practice makes perfect. The Greek orator Demosthenes had a speech defect, he was stuttering and unable to produce the “r“ sound. To correct it, he practiced speaking with his mouth full of stones. Nowadays, those striving to become great orators and leaders do not have to fill their mouth with stones, but it helps a lot to practice in front of a mirror, or even better, in front of a video camera. The first step is to speak out loud. Not only because someone who appears timid is not likely to inspire anyone to take an action, but also because it usually happens that we have no problems with a certain phrase when we mutter it, but the problem arises when we say it out loud. In a similar vein, it’s important to practice movement and expression because they need to be coordinated: public speech experts strongly advise against slouching.

Paul Argenti, a corporate communication professor, puts 3-4 hours into preparing his speeches, analyzing them and dissecting every important point until it is perfect.

People are far more likely to absorb certain information or idea if it is wrapped up in a story. Their attention will inevitably fade if they are offered only dry lists of information, but if that same information is presented to them through a story, their attitude changes and they begin to listen. What is the reason? The human mind is not good at remembering lists but it is great at remembering plots. So the idea is to use one of those archetypal stories about running into obstacles and overcoming them, such as the Quest story. Personal stories are equally compelling because they allow the audience to gain some insight into who the speaker is, they reveal a person behind the words.

Recycling the same ideas over and over again is not likely to lead to a compelling speech. It’s far more likely to bore everyone to death. Every leader striving to become a great orator needs to be on the lookout for fresh ideas because they make a big impact and keep the audience engaged and listening. It often happens that a great idea pops up and we forget about it because we are busy doing other things. To avoid this and capture a great idea right away, before it disappears without a trace, it’s advisable to use an online mind mapping tool such as MindMeister.

Those speakers who know how to stay focused are the ones who command attention throughout the speech. To succeed in this, it is important to master various breathing techniques, such as breathing diaphragmatically or belly-breathe. In a similar vein, it’s advisable to move, not nervously, but with confidence and clear, strong gestures, while maintaining eye contact. Trying not to speak too rapidly because doing that shows nervousness is another key to staying focused.

Non-verbal communication is often neglected but it has great importance. To those who know how to read it, it indicates how a speaker really feels. A speaker could be using the words that seem full of confidence, but body language could be telling an entirely different story. For a leader to inspire confidence while delivering a speech, it’s important to maintain good posture: standing tall with shoulders back. Eye contact should be maintained, but without persistent staring and with a smiling expression. The tone of voice should not be too loud, but moderate. Gestures should be purposefully driven and match the size of the audience.

People learn best through imitation and TED is a gold mine for high-quality and engaging speeches. When a person is told that her talk needs to be peppered with interesting stories in order to be engaging, it sounds a bit abstract. But this TED video brings it all to life. It’s only five minutes long, but Tania’s talk is incredibly captivating as she recalls how she rose from the childhood of poverty through a number of anecdotes. All public speaking coaches offer the same advice: smile a lot. But does it mean that one should smile all the time like a Cheshire cat? No. It means that one should smile as Brene does in this TED video. Smile in a warm and inviting way that makes the audience feel like they are at home, with their family and friends. However, only watching these videos is not likely to be much more helpful. Not even the most talented speakers can succeed without practice and paying attention to each word they pronounce and each gesture they make.

Do not underestimate the power of words. It’s true that people nowadays are not great listeners or great talkers in their personal lives. But there are still those who can shake them out of apathy and get them to listen. These persons are the leaders with a talent for coming up with inspirational speeches, capable of engaging the audience and inspiring them to get up and take action. When we say a talent, it does not mean that this skill can not be learned and polished. Nothing can be learned overnight and learning how to write and deliver a great speech requires years of practice. We tried to offer the quickest route with our tips and tricks. Being just a great speech writer or finding an essay editor, does not cut it. Speaking with charisma, telling stories, smiling and paying attention to body language, are some of the major components of every inspirational speech. Finding out if one is able to deliver an inspirational speech is the best answer to the most important question for every leader: “Are you ready to lead?“. Because only the ones who can come out there, tell their personal story and capture a crowd so that it listens attentively are ready to lead. 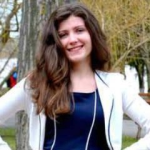