Nathan Latka Is The James Bond Of Start-up Founders I’ve known Nathan for nearly 4 years, back before Heyo was Lujure or Fan Page Factory. And what’s struck me about this young genius is his optimism, tenacity, and relentless brilliance.

Hollywood would have you believe that successful startup founders drink appletinis and get rich overnight. The reality of entrepreneurship is staring into the abyss for 10 years, believing when nobody else does.

In early 2011, I put on a webinar on Facebook marketing and saw he had registered. Among the hundreds there, he stood out as inquisitive – hungry and energetic.

A few days later, I found myself on skype sharing everything I knew about social analytics and sharing connections.

I even interviewed him on AllFacebook.com – he didn’t pay me or do any special favors.

I wondered how he was able to generate such infectious enthusiasm.

I thought to myself, “How does this guy do it?”

I found out in a trip to Blacksburg, VA, where his company is still headquartered.

Back then, his “office” was above a pizza parlor, basically a dusty attic with a few chairs and tables. He somehow managed to get rent for free, perhaps via barter for marketing services.

His apartment was also free – same arrangement, I think. And his staff, a few kids from Virginia Tech, seemed highly motivated, yet paid retail wages.

He built his business single-handedly while a student at Virginia Tech, creating Facebook pages for businesses. His knowledge and enthusiasm was so great, that in a few months he pulled in $73,819.00 and dropped out of school.

It could be any hour of the night – if I sent him a skype or email, he replied instantly. I’d be speaking at a conference in San Francisco, Phoenix, or New York and see him pop up.

I’ve given and attended a lot of webinars – I don’t know anyone better at live selling than Nathan.
He’d create a landing page that shared a couple of awesome tips, perhaps for hotels or another vertical. People would share the page and sign up for his GoToWebinar.

A few minutes before the webinar started, you’d get an email asking “Should we wait for you?” You’re then thinking, “Well, I don’t want to hold things up, so I better sign in right away.” And then the magic begins.

If you could combine the ShamWow guy with Steve Jobs (the vision part, not the jerk part), that’s what you’d experience. In a live webinar, he’d use multiple techniques to get you to participate:

He might have 200 people on the call and would keep nearly all of them for 90 minutes or however long.

Competitors would sometimes lurk on the webinars. So he’d unmute them and ask them questions – cruel, but not unfair, since they wouldn’t have knowledge to respond well.

I’ve not yet had the courage to try that technique yet. Nor would I want to go up against him in Facebook app knowledge.

Nathan is a Macgyver, building a software company when he had only bubble gum, string, and tin foil.

The perfect entrepreneur is super resourceful, since you have to get the staff and money ahead of having a solid company. You’ve got to be able to motivate employees, clients, and investors even if you have no cash and a limited product.

One time we were in New York at a Facebook marketing conference. The cost to buy an exhibitor booth at the show was a lot of money, as you’d expect.

So he just invited a few of the top speakers out to a mastermind and dinner afterwards. He had Jason Keath, Ted Rubin, Ric Dragon, Heather Dopson, and Alex Houg, among others.

We had use of an impressive boardroom at a midtown law firm – free in exchange for hearing their pitch.
And the cost of dinner, even with drinks, was a fraction of what it would cost to be an exhibitor.

Some people said Steve Jobs was a liar for selling products that weren’t yet made. They called it his “reality distortion field” – but really, he just had his tenses wrong. What was future tense he was describing in present tense – the hallmark of an entrepreneur.

Today, he’s raised a couple rounds of about $2.5 million and has a legitimate office. He hasn’t needed to raise money, since he’s been able to turn a profit through bootstrapping. And it’s when you don’t need money that the VCs come running, like the girl who plays hard to get.

Clearly, he’s the driving force of the company, but if you ask him, he’ll say he’s a co-founder among others.

Take a look at his rigorous schedule, starting at 5:30 am.

I remember when people would boast to one another how little sleep they get by on. One person would boast of a “power breakfast” at 6 am, while their colleague one up’s them with their London conference call at 4 am.
There are the stories of Steve Jobs and Elon Musk each running two companies and working 100 hours a week.

But Nathan puts his sleep and health first, such that he has to work only a couple hours a day. He’s boiled priorities down to what’s truly impactful, making sure to spend time in planning and learning. Remember “measure twice, cut once?”

By not being heavily involved in the day-to-day micromanagement detail, he can be proactive, instead of reactive.
He has the free space to anticipate what his company will need and to build the right relationships.

He even models his diet and exercise with the same rigor:

I’m proud to have known Nathan before he became a star:

And I’m honored to be able to contribute content and do co-marketing with him. I must feel somewhat like the owner of the pizza parlor or his landlord – happy to participate.

The vision of helping small businesses succeed is a great one, though the path is littered with bodies. Heyo wouldn’t be the first to be attracted to the size of the market, then decimated by unprofitability in execution.

But the alignment of his mission and actions create energy that money can’t buy. What are you doing with your personal branding to be the James Bond of your cause? 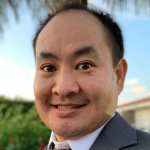