When I’m not selling, leading or training, one of my favourite hobbies is to play the ‘cello. I like to think I’m quite good – I’ve been learning since I was 7 years old, I have a music degree, and although I probably don’t practise as often as I should, I’m very competent when playing in amateur orchestras.

Last weekend (at time of writing), I was lucky enough to be playing in the Water City Festival Orchestra in London. This orchestra meets only once a year and is put together on an ad hoc basis. With 10 ‘celli, we had quite a large section, but due to some unusual rehearsal timings, people’s arrivals were staggered over the weekend. I didn’t mind where in the section I sat, and as a result, was moved around several times over the weekend.

On day 2, I was co-leading the section, and despite one of my regular “practice holidays” (that’s a break from doing any practice, not a holiday in which I practise!), everything felt very easy. Sitting at the front can make one feel a little exposed, being right under the conductor’s nose, and next to the section leader, but I found I wasn’t missing any entries, played in time, and was able to provide good guidance of bow direction and phrasing to those sitting behind me. When I went home that night, I was feeling rather good about myself.

Day 3 of the course arrived, and other people had turned up. The conductor asked that, as I seemed so comfortable with the music, I sit at the back and provide some support to some of the weaker members. And this is where it all started to go wrong… Sitting at the back, I was a long way from the conductor, I was surrounded by other instruments playing different notes, and it was a little cramped so I didn’t really have enough room to move my bow. And my playing went down-hill rapidly! I was missing entries, getting lost in the middle of a piece, and playing like someone who hadn’t practised for a month… Why? Because I was no longer sitting right in front of the conductor, I no longer had the section leader sat next to me, and I no longer needed to worry about those behind me needing guidance.

What does this mean in the business world?

Well, perhaps sales leaders should consider that their top performers have a slightly easier ride than others. The star salesperson may have slightly more attention from the team leader, may get slightly more leads (as the leader sees they have the best chance of converting them into sales), and feels a certain responsibility to the rest of the sales team to show them how to perform, in turn making the super-star up their game still further. They’re 100% focused on sales with no distractions to take them off course.

The average performers in your team are like those at the back of a ‘cello section in an orchestra – perhaps they’re not right under their manager’s nose, able to see the leader’s direction all the time; they might have other distractions around, from marketing, operations or somewhere else in the company; they don’t feel the additional pressure to provide leadership to others… and although they might be very capable players, who might shine if they were already number 1 in the team, the journey to reach that point seems endless. The lack of huge success can feed into other problems – a dry patch can make salespeople nervous about rejection from customers, meaning they are too conservative in their approach so their performance can suffer further as a result, leading to a bit of a vicious circle.

As a sales leader, it’s important to assess your team members as individuals and get a good idea of their strengths from an unbiased point of view. Trust all team members to bring in business from the next hot lead, and provide personal guidance and direction if necessary. Make everyone feel like a leader, and watch their results improve.

Images:  ”Symphonic Orchestra on the stage of ELTE University on November 12, 2010 in Budapest, Hungary. / Shutterstock.com“ 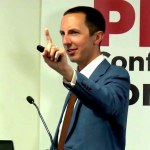