The weather outside is cold and dreary, as we all suffer from lack of sleep and too much caffeine intake, dryathlons and new found diets are taking their toll; it appears the working class have a minor case of the blues. Even the last-season sales don’t seem to be helping, okay maybe they do a little, but they’re serving as a distraction from the workload which is amassing.

With a new year comes new beginnings. But getting into the swing of things is often easier said than done. January is surely the most unappealing month of the year, and even the most energetic of people share this lousy feeling. No matter how you’re feeling, business continues: deadlines need to be met, bills need to be paid, and money needs to be made. And soon this feeling of doubt escalates and becomes a symptom of stress.

Unsurprisingly when you’re stressed you cannot think straight. According to the book ‘The SuperStress Solution’ by Dr. Roberta Lee, research shows that we secrete the stress hormone cortisol when surrounded by disarray. This is bad news for your body, mental health and fellow co-workers. Or good news if you do something about preventing such catastrophes from happening.

Take a look around you. Are you disorganised and untidy? From bulging inboxes to endless meetings, and from long lists of objectives to terrible time management skills, employees often negotiate a mass of clutter. Here are three things you need to declutter from your business for a better peace of mind:

Many organisations actively work towards making their business more streamline, to make the work being produced more effective and efficient. But many of these organisations forget to improve the way employees are counselled and trained, as the most deliberating form of clutter is organisational complication.

Sure, some organisational complication clutter is inevitable. Companies want employees to achieve collectively what they cannot do individually. As a result, meetings and memos are vital to co-ordinate one another. However, as meetings multiply, clutter begins to feed on itself, and the morale and productivity levels of employees plummets.

Bain & Company, a consulting firm, studied a sample of big firms around the world, finding that their managers spent 15% of their time in meetings, a share which has risen every year since 2008. Many of these meetings were found to have no clear purpose. The higher you go up the career ladder, the worse it is. Senior executives were found to spend two full days a week in meetings with three or more colleagues.

You must stop this clutter from accumulating in the first place by allowing employees the power to clear their schedules. Grant co-workers the space to get on with their work by reducing catch-up meetings and never holding meetings without a clear agenda. The most valuable resource of a company is the time of their employees. When employees waste time, your business wastes money.

Perhaps organisational complication clutter is the price of success. The complexity of problems grows as the business grows. A large organisation will face bigger problems than a business starting out. However, another problem company’s face is how much time employees are wasting responding to their emails.

Sending an email is a quick and convenient way to acquire the information that you require. As a result, colleagues and clients expect an immediate response. Checking emails regularly seems like the polite thing to do, but in essence you’re costing your business precious time and money.

Bain estimates that the number of external communications that managers receive has increased from about 1,000 a year in 1970 to around 30,000 today. Every message received imposes a ‘time tax’ on the people at either end of it, and these taxes can spiral out of control unless they are managed. The introduction of virtual messaging through email to be the biggest cause.

The average executive team spends 1.5 hours a day responding to emails, 80% of which are unimportant, whereas the average employee receives 304 weekly business emails. It takes sixteen minutes to refocus on your workload after handling an email. All employees should be encouraged to turn off emails while working on their workload, and to remain from sending emails in-house. Always think twice about sending emails, and don’t expect a direct response.

It’s no surprise as new technologies are being introduced to help our lives become more convenient, our concentration levels are decreasing. It is reported that 90% of the population in developing and developed countries are said to own a mobile phone. This medium provides a huge benefit to both inside and outside of the working environment. As a result, many employers distribute smartphones to their colleagues to allow them to keep in touch with both the business and clientèle.

Smartphones allow for employees to search for work-related queries on the go, access social accounts around the clock and chat to friends. When employees are stressed or feel they need a time-out from working, they will tend to misuse their mobile phone. This can be a real distraction at work and stop you from doing your job properly.

Software firm harmon.ie surveyed 1,000 British office workers and found that the lure of being in touch via their mobile phone was that overpowering, they wouldn’t think twice about sending a message in a face-to-face meeting.

David Lavenda, of harmon.ie, said: ‘It would appear that we have a classic case of double standards in the workplace, with 82 per cent complaining about other people’s tendencies to disrupt proceedings by answering a mobile phone, tweeting, sending an instant message, responding to emails or updating their social status. ‘Seventy per cent of those that rudely interrupt meetings themselves would be offended if someone did the same thing to them. Clearly, the perceived pressure to stay connected has led many people to neglect their manners.’

As well as affecting the productivity of workers, this misuse of mobile phones may result in sensitive information being leaked in rants. It may also be harming their prospects. A third of those polled said it takes them 20 minutes to buckle back down to work after being distracted by a text message, email or Facebook posting.

Instead you should aim to create personal space for each employee to allow for them to tune out of the outside world and maximise output for more value. If mobile phones become an issue, you must address that issue before the business is negatively impacted.

Images: ”Declutter Your Life written on a board with a business man on background/Shutterstock.com“ 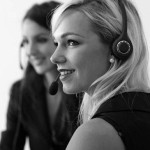