The Importance Of Being Pinnable Pinterest has hit 48 million users and as one of the fastest growing social media platforms, it is becoming a force to be reckoned with.  Writing a successful blog post is no longer a case of using carefully selected keywords, good content and clicking ‘publish’ – blog posts now have to be shared across the various social media platforms in order to maximise your readership and your reach, and of course, your conversions.  Those social media platforms must include Pinterest.  However, I am constantly surprised by the number of posts that I pin and they just aren’t ‘pinterest-ready’.

Pinterest Tutorial – How to ensure your blog posts are pinnable

Spend some time choosing the right image for your blog post. If it is a post about a visual topic, for example, interiors or fashion, you’ll be using plenty of images in the post in any case.  If it is more of a business / non-visual type post, you know already that you need the occasional image to break up the text and for visual interest but  you need to  work out how your image will appeal to those on Pinterest.

Many companies are creating infographics to sum up statistics or impart knowledge. Posting the infographic in a blog post means that when the pinner clicks on the infographic, they will be brought to your post, complete with more information and a call to action. Most infographics are long and narrow in design, hence taking up more space on the column layout of a Pinterest page. However, beware of creating one that is much longer than a screen size of a laptop as viewers will lose interest.

An instructographic is a text image that promises answers, tips and knowledge. Pinners know that the instructographic will ‘do what it says on the tin’ and the full instructions, answers or tutorial will be found once the pin is clicked. Instructographics can be as simple as the one I have used above which has text on a white background or it can be a series of images as the crochet example here.

Instructographics should promise tips, answers, instructions or a tutorial. Starting them with words such as ‘How to ….’, ‘Ten Tips ….’,  ‘Free Pattern for ….’, ‘Step by Step Instructions for ….’, ‘Tutorial for ….’, ‘5 Ways to ….’, and ‘7 Top Reasons for ….’. They can be formed from text on a plain background or text over an image (just ensure the text is legible).  What I like about this crochet instructographic is that one knows at a glance that one will find the written instructions when one clicks on the link and as a nice added touch, the text is written in a stitching-like font!

It is exceedingly important that when a person pins your post, that the descriptor (containing the keyword/s you have carefully selected and used) is pinned with the image.  Yes, the individual may remove your descriptor and add their own but this is unlikely.  If the descriptor is not there, the potential pinner has to take the time to add a description – which means that they may not bother, they may abort the pinning process, they are unlikely to use the keyword you’d like used.  Remember that pinterest boards are now being featured on google searches so you want the keywords to be there.

Many of the Pinterest plugins will automatically post the blog post title as the descriptor which works great, however, don’t rely on this. Many pinners won’t bother to scroll up or down to the top or bottom of the post to use the plugin or by habit, they will pin using their bookmarklet tool on their toolbar. If the image isn’t named appropriately, the descriptor will be whatever the image has been called, e.g IMG9574.jpg!!

The quickest and easiest way to name all of the images used in your post is to rename as you are uploading them (in wordpress) or rename them when resizing/editing them and saving them in your folder.

Rename it in the title, alt title and the descriptor boxes when uploading the image to your blog post.

You should name all the images in the blog post appropriately as you don’t have control over which image the pinner will actually pin.  If your post is filled with images that don’t necessarily illustrate what the post is about, the descriptor alone won’t entice people to repin or click, for example, a post filled with screenshots won’t work to its potential. Therefore, it is a good idea to create an image that spells it out at a quick glance – for example, text image used at the top of this post incorporates a pin so anyone glancing at it knows immediately that it will have something to do with pinterest.

If you are unsure about how to add text to a photo, read this tutorial for picmonkey and pinwords.

These steps will take seconds yet I’m constantly amazed by the number of bloggers that aren’t making their posts as pinnable as they can.  Don’t be one of them – from now on, choose and name your images appropriately for much better results on Pinterest. 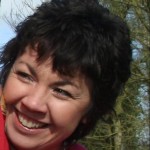