The Tannery Restaurant: Behind The Scenes With Máire Flynn underneath. So I wanted to know more.

Behind the scenes of the Tannery is Paul’s wife Máire Flynn keeping it all running smoothly although Paul is the Flynn that is mostly in the limelight. I thought it would be interesting to hear how Máire keeps such a tight ship, what her typical day would be and how they give back to the community of Dungarvan.

What made you choose Dungarvan to set up the Restaurant in the first place?

Setting up the Tannery in Dungarvan wasn’t based on any sound business plan.  At the time, my husband had spent many years working in both London and Dublin and wanted a different pace of life.  We were both from Dungarvan originally and happened to be at a friend’s wedding.  A local auctioneer asked me for a dance and told me about a premises which would make a great restaurant (not the one we are in now as it turned out).  That planted the seed in our minds and since at the time there weren’t many restaurants in the town, we decided to open up in Dungarvan in 1997.

Related: Dungarvan Brewing Company – A Success Story Brewed From Redundancies In A Recession

I think you show how running a business can be done whilst having a family life too. I’ve seen how you keep the cogs of The Tannery turning – tell me what your normal day would be and how you keep such a tight ship in your business? 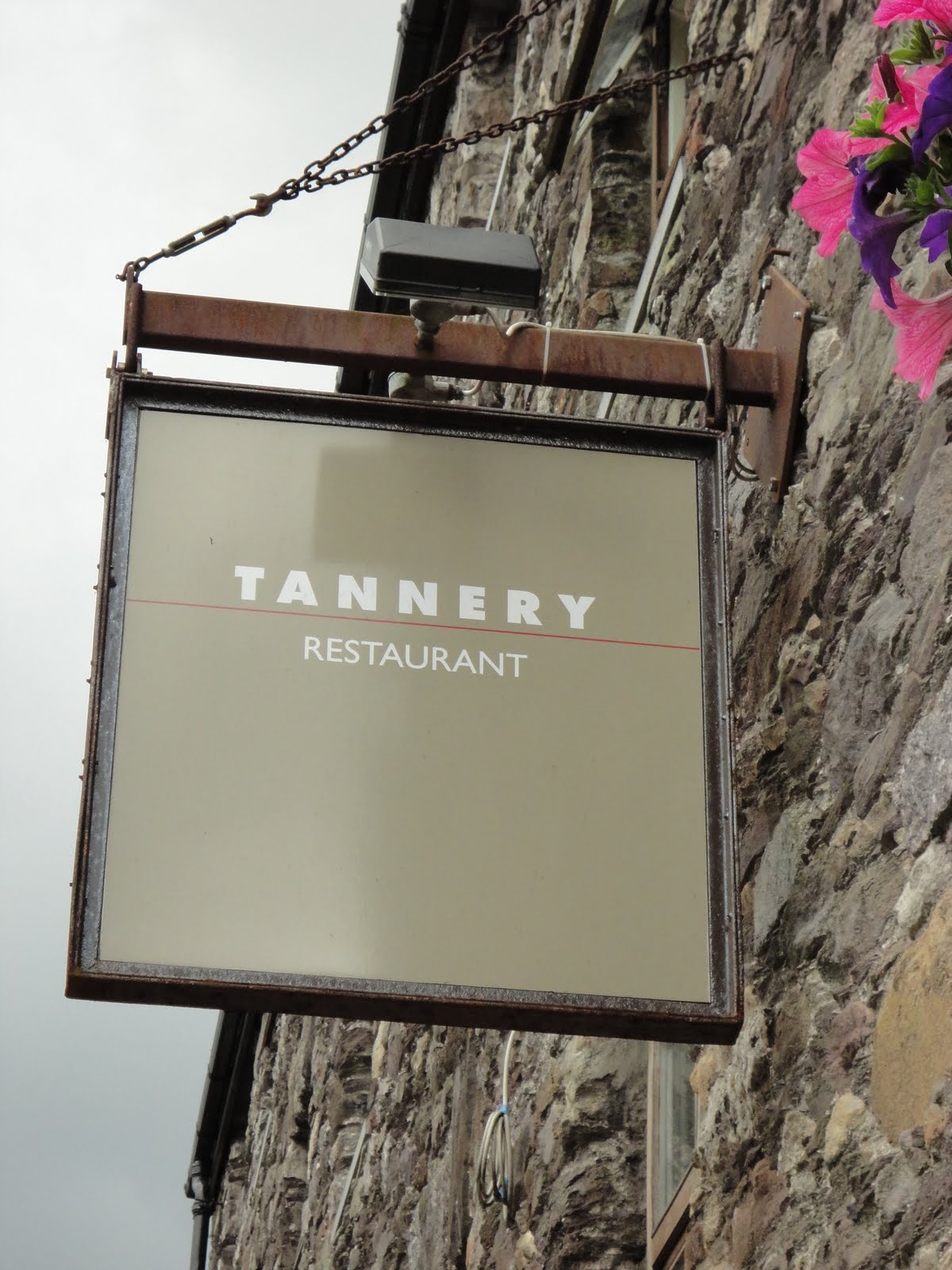 A normal day for me is up at 8am and breakfast with my children.  Drop them to school and I try to get a walk or a run in at this time, around 9 or 9.30am.  Then I head into the office which is based in the Tannery Cookery School across the road from the restaurant.  Emails, emails, emails! I also look after the cookery school side of things myself and there are normally courses on every weekend which have to be confirmed etc.  I also check on evening bookings including accommodation bookings for the Tannery Townhouse.

There is at least one enquiry per week for a hen party to take the cookery school for an afternoon and have dinner afterwards so I usually do the package for them.  We often do corporate team builds so I do the organising for those too.  I also take care of my husband’s diary, looking after his bookings for demos, filming and interviews etc.  Then I go over to the restaurant to have a look at what’s going on there.  There’s always some calamity, machine breaking down etc.  I might have a meeting with a wine supplier about putting new wines on the list and also a chat with Paul about menus for the day.  If I can, I like to do half an hour in the bookings office with the phones because

I love that initial contact with our customers taking their booking. After all that I collect the girls from school and I’m home for a few hours with them in the afternoon.  And on Fridays, Saturdays and Sundays I go back in to the restaurant to do service on the floor.

I keep such a tight ship in the business because I am involved in absolutely every aspect of it, be that a bad or good thing!!

Related: How Facebook Is A Perfect Match For One Irish Hotel

What is the biggest lesson you have learned from running a business that can also apply to any business?

The biggest lesson we have learned is cook for your customers, not yourselves.  That doesn’t mean you can’t be true to your heart.  Always, always listen to your customers.

What prompted the idea to set up the Tannery Cookery School?

In 2006/2007 we were thinking of our future and maybe an easier way of life as we got older so we decided a cookery school was a natural progression for our business as at that stage Paul had done a lot of demos and guest demoed in different cookery schools and enjoyed it very much.  An ideal premises came up for sale just up the street and we went for it!

How has the Recession affected your business? Did you have to make radical changes to adapt?

The recession in Ireland has been a life changing event for us.  At the time our cookery school opened, in November 2008, it seemed like a tap turned off.  The business landscape completely changed.  Nothing was certain any more, and that included the restaurant. Suddenly Saturday nights, which were always a given, didn’t even fill.  It became blindingly obvious to us that we were living in a small town with a population of 10,000.

It may seem crazy, but this had never been apparent to us before because we were lucky enough to have some corporate business with some multinationals in the area which gave us mid-week business.  Our local Waterford County Council’s administrative offices were in Dungarvan, again some business from them, but all of the corporate business also stopped.

I suppose our first three years, 1997 to 2000, in business were also very difficult but that didn’t bother us starting out, we had nothing to lose then.  Now we had everything to lose.  I would not like to relive the last three or four years!  We made lots of changes to adapt; we diversified with the Cookery School and reviewed our rates for the Townhouse. We had to restructure our staffing levels and just basically kept our heads down and worked and worked through it.

What advice would you give to someone, maybe a married couple, setting up a restaurant or hospitality business?

It may seem cynical of me, but I’m not sure I would advise any married couple to set up a restaurant together!  Even though lots do.  There is a big plus and a big minus.  First the plus – NO other business partner will be as interested or as motivated or as much of a support in your business as your husband or wife.  Secondly the minus – the business can take over your life.  Especially the hospitality and restaurant business; it’s really not great for family life.

The Tannery is very involved in the local Dungarvan Community. How do you ensure this is kept up?

We are heavily invested in the local community and we are very much part of Dungarvan, both loving Dungarvan and being part of our town.  The Tannery employs 22 people which is not insignificant and we try to support community, school and charity events as much as we possibly can.  We invite local pre-primary and primary schools to the garden and mentor St Joseph’s school student’s garden.  Paul occasionally does cookery demos for the secondary schools and like everyone else on the Waterford Food Festival committee, Paul’s time given to it is voluntary.

The Tannery and Paul play a big part in the upcoming Waterford Festival of Food. Tell us how you got involved and what is happening?

This year is our 5th Waterford Festival of Food and is the biggest and best ever (we hope).  Paul has been involved since the very first one and the festival has grown every year.  Apart from doing demos with Martin Shanahan from Fishy Fishy in Kinsale, Paul is instrumental in luring the big food names to the town for the festival weekend.

So this year we have Mary Carney (Masterchef Ireland winner), Dylan McGrath, Nick Munier, Martin Shanahan, Michael Quinn – and we have two special events in the Tannery to celebrate Food Festival Weekend.  Famous UK chef, Angela Hartnett will cook a dinner in the Tannery on the Friday night, 13th April and Richard Corrigan will cook a dinner (with Paul) in the cookery school on the Saturday night.

After the fun of the Festival is there anything exciting planned for The Tannery?

Always something going on in the Tannery.  We are hoping to run a series of monthly Friday night Tasting Menus and also a wine dinner with Tyrrell Wines on 4th May and on the Tuesday after the food festival, Paul will start filming for his second series with RTE, Surf n Turf which we hope will be aired later this Summer.

A big thank you to Máire Flynn for taking the time out to do this interview – especially with all the busy preparations for the Waterford Food Festival which runs from April 12th to April 15th. I’ll be there so come and say hi and also see how the Tannery works for yourself.