Global & UK Income, and how resident and domicile status impacts your tax position

Remittance Basis is the basis of taxation that is an addition to the standard tax rules, which is applicable to residents of the UK who aren’t domiciled in the UK. Such taxation requires the resident to be taxed on foreign income and gains remitted to the UK. Remittance basis taxpayers also must pay taxes on the income they have earned in the UK. The ‘remitted to the UK’ term is not just confined to the bringing of foreign income to the UK, if the individual is availing services in the UK for their benefit or remits something that has been bought through foreign income and gains, then the individual is also making a remittance. Accounting firms aim to guide such individuals to remain compliant to the entire tax structure and with the help of tax accountants resolve issues facing remittance accounting.

What role does residence and domicile play in personal tax?

Residence and domicile have a very important role in determining the type of taxation an individual in the UK might have to pay. Residence status in the UK will determine the individual’s tax liability and claim to personal tax allowances and other privileges, whereas the UK domiciled individual gets taxed on worldwide income. Always be sure about your tax circumstances, speak to a business accountant who can design bespoke solutions to all your tax problems.

How do you determine UK residence?

Resident status in the UK is dependent on several factors ranging from the number of days  (183 or more) you have spent in the UK during the tax year to fulfilling the conditions under the (SRT). Statutory Residence Test (SRT) was incorporated in the finance act by HMRC and has been in effect from tax year 2013/14 onwards. The tax year 19/20 falls between 6th April 2019 and 5th April 2020.

UK residence is determined by either applying the Automatic Overseas test or the Automatic UK test. Sufficient ties test will determine the residence position if one does not meet any of the prior tests mentioned. If you have tried using the SRT, AOT, and TT but are unable to determine your residence test, we recommend speaking to a Business Accountant.

How do you determine UK domicile?

The second condition states that an individual automatically qualifies for a domicile if he or she has been a resident in the UK for 15 out of 20 tax years immediately before the current tax year.

How does Domicile and Resident status impact UK taxes?

UK tax application on individuals is greatly affected by an individual’s domicile and their resident status. An individual who is a UK resident and a UK domicile holder is liable to pay taxes on the income that is being generated in the UK and on his global worldwide income as well. Resident or non-resident status for tax purposes can be determined by applying the Statutory Residence Test (SRT)

Residents of the UK that are foreign domicile holders have an option to adopt either the remittance basis or the arising basis of taxation. They are not liable to pay taxes on income from foreign sources as long as the income is not remitted to the UK and is less than £2000, this is only applicable until the 7 out of 9-year rule becomes applicable.

Non-UK residents, who are domiciled in the UK will have to pay taxes on their worldwide income in the UK (if you are paying taxes in two places look at the double taxation treaty applicable to you). A UK-resident can become a non-UK resident if they spend no more than 91 days out of 365 days in the UK with days of arrival and departure not included. If an individual owns a property in the UK but is non-resident, he or she has to pay property tax on the property income in the UK. The same rule applies to those who remit income through foreign sources to the UK. However, non-residents of the UK are not liable to pay tax on interests from specific UK government securities and interests from banks situated in the UK.

Tip: As a Non-Resident UK Landlord estate agents will withhold tax at source from your property income. If you want to prevent the withholding of tax apply for NLR (Non-Resident Landlord Application) with HMRC.

What is the remittance basis charge?

What do I need to do if Remittance Basis Charge is applicable to me?

What is the residence, remittance basis?

Residence rules were changed during 2013-2014. HM Revenue & customs introduced new rules which assisted in identifying resident or non-resident status for an individual. This is due to the fact that many people tried to evade taxes by traveling to different countries. Under the new regulations, a person is required to fill the residence remittance basis section online in their tax return. According to the conditions, the residence, remittance basis section has to be filled by non-residents and residents. Residents in the UK filling the responses in the section could be eligible for overseas workday relief, might possess a foreign domicile, could be expecting a split year treatment for income or might want to adopt the remittance basis for another reason. 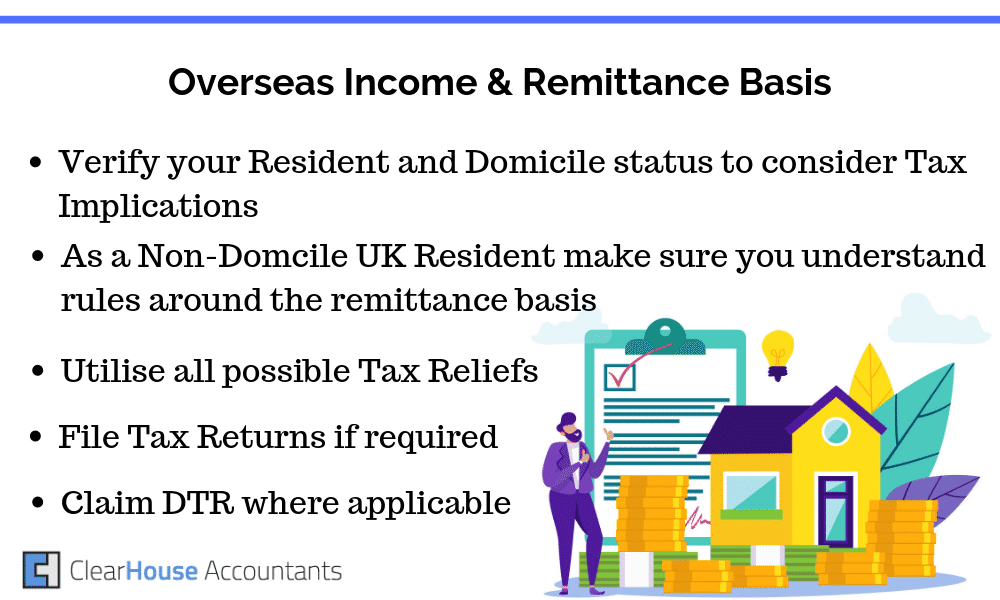 Individuals must make sure that they declare all of their worldwide income for tax purposes based on their domicile and residence status, the income could be derived from foreign bank interests, overseas investments in properties and other sources.

If you make a gain on investments abroad, check the rules around remittance, domicile and residence status. Speak to an accountant, find an accounting firm nearby or appoint a competitive tax accountant but make sure your gains are reported properly for tax purposes.

Expert Tax accountants will carry out all relevant checks to ensure you pay tax on the correct income in the most tax-efficient way, be sure to ask your accountants a lot of questions and make sure you understand what is being filed for you as the liability of your tax return remains with you.

An individual must be aware of all the obligations that come with their UK domicile.

It is financially and legally very important to keep track of all the major transactions you incur in a tax year, this record will be helpful if the tax authorities investigate your tax matters relating to your tax returns or regarding income or gains that have been remitted.

An individual might have paid taxes on his or her foreign income in a foreign country where it originates from, however, the domestic country may demand the individual to declare all sources of income. In order to avoid getting double-taxed individuals to need to make sure they utilizing all possible double taxation treaty reliefs available to them. Ask your Tax Accountant to claim all possible reliefs under the relevant double tax treaty.

An individual might be unaware of the potential tax reliefs that are present in the tax system. Accounting firmsaim to help out their clients by providing valuable tips and advice which can be very useful for the taxpayer who is unaware of the tax system and its complications.

Thao Le is a Senior Accounting Manager at Clear House Accountants. Having worked and grown in the industry for a number of years she is now responsible for a team of accountants, tax planners and bookkeepers, working with them to help clients from a variety of industries, grow, save money and plan for the future. Thao holds a Bachelor and Masters degree in Accounting and Finance and is currently working towards her ACCA, she is also a Xero and Quickbooks Certified Advisor. Thao believes her expertise lies in high-level tax planning, management accounting and strategic business planning based on financial performance and business analytics. Her experience, expertise and knowledge make her an exceptional contributor at clear house towards various articles and research content.

5 Ways to Get Your Employees Out of the Office

How to Do Taxes for Your Crypto Gains

Cryptocurrencies are an attractive investment market. The constant variation of the values assets in the crypto markets undergo can lead…